Important Lakes all across India that you should know

When it comes to competitve exams, General Knowledge is an important part. Today, we are going to take a look at the important lakes of India & where they are situated.

Located between Krishna and Godavari delta.

Mahabharata mentions the Sambhar Lake as part of the kingdom of the demon king Brishparva.

Located in the town of Pushkar in Ajmer district of the Rajasthan.

Pushkar Lake is a sacred lake of the Hindus. 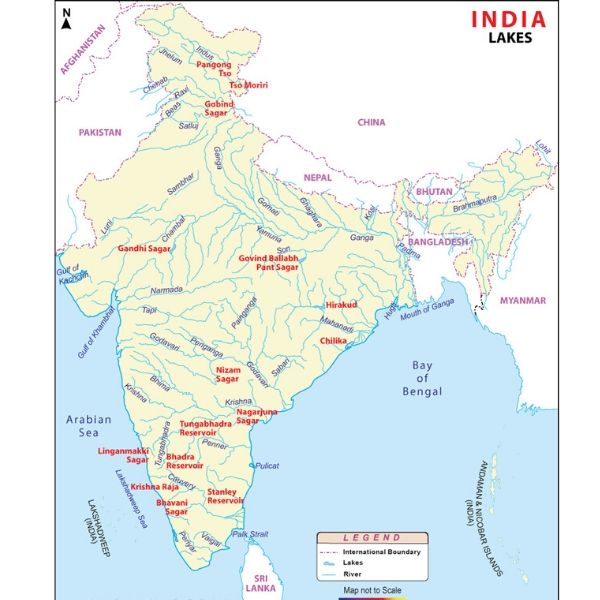 Lake Basin was formed as a result of tectonic activity and is fed by the Jhelum River.

The large spindle-shaped barrier island named Sriharikota separates the lake from the Bay of Bengal.

The island is home to the Satish Dhawan Space Centre, the launch site of India’s successful first lunar space mission, the Chandrayaan-1.

KeibulLamjao the only floating national park in the world floats over it, which is the last natural refuge of the endangered Sangai or Manipur brow-antlered deer.

The purity of the lake water for drinking use is attributed to the presence of large population of larva called cavaborus that consumes bacteria in the lake water.

The Nehru Trophy Boat Race is conducted in a portion of the lake.

It is the largest coastal lagoon in India and the second largest lagoon in the world.

Chilika Lake is the largest wintering ground for migratory birds, on the Indian sub-continent.

Dal Lake is a lake in Srinagar and is integral to tourism known as the “Jewel in the crown of Kashmir” or “Srinagar’s Jewel”.

Asia’s largest Tulip garden is on the banks of Dal Lake.

Mughal gardens, Shalimar Bagh and the NishatBagh are on the banks of Dal Lake.

The lake – Nalsarovar – and the wetlands around it were declared a bird sanctuary in 1969.

Tsongmo Lake or Changu Lake, is a glacial lake in the East Sikkim.

The lake is the venue for the Guru Purnima festival in which Jhakris of Sikkim assemble at the lake area to derive benefits from the healing qualities of the lake waters.

It is the largest lake in Kumaon region, known as the “lake district of India”.

Barapani or Umiam Lake is in Shillong.

The origin of Lake in 1965 is due to the UmiamUmtru Hydro Electric Power Project, the first Hydel power project in the North-east region of India.

Situated in the Nainital district called the Lake District of India.

Periyar Lake is formed by the construction of the dam across the Mullaperiyar River in 1895.

The notable elephant reserve and a tiger reserve, Periyar Wildlife Sanctuary is located on the banks of PeriyarLake.

The lake is in Hyderabad, built by Hazrat Hussain Shah Wali in 1562, during the rule of Ibrahim QuliQutub Shah.

Connects the twin cities of Hyderabad and Secunderabad.

A major attraction at the Hussain Sagar is the 16 meter high, 350 tonne monolithic Buddha statue on the ‘Rock of Gibraltar’ installed at the center of the lake.

It has been renamed after the great ornithologist, naturalist Salim Ali and also known as birdman of India.

‘Nakki Lake is situated in the Indian hill station of Mount Abu in Aravalli range.

Mahatma Gandhi’s ashes were immersed in this Holy Lake on 12 February 1948 and Gandhi Ghat was constructed.

Also known as Upper Lake lies on the western side of the capital city of Madhya Pradesh, Bhopal.

The Western Ghats and Tourism: Important Notes for exams