Important Details you need to know about the Indian Fiscal System

Fiscal system is the anatomy of a country’s government revenue and expenditures. It also includes budgetary activities of the government like revenue raising, borrowing etc. To govern this system or to conduct this system fiscal policies are designed and implemented by the government. Let’s understand the details about Indian Fiscal System.
These Fiscal policies deal with the use of taxation and public expenditure by the government and management of Public debt for achieving stabilization or growth of the economy. 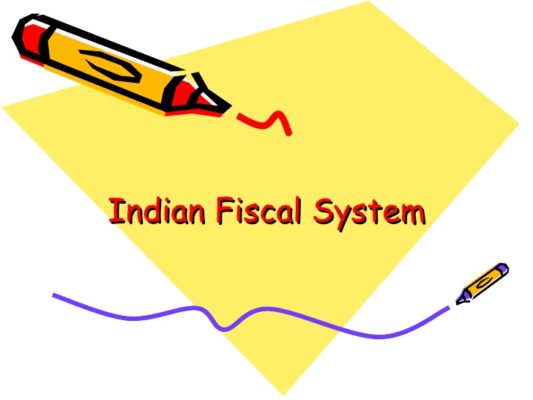 It ascertains the full employment in the economy.

It magnifies economic growth.
It instigates savings and investment in the economy.
So, in this way by maintaining viable fiscal stability in the economy the fiscal policy is managed by the government.

Public Revenue– Are the different sources of government income such as taxes etc. It includes-

Capital Receipts- Consists of those inflows to the government that does not fall under the nature of regular income, instead belongs to the repayments/recoveries, or proceeds from the sale of assets etc. Disinvestment (selling some shares of a PSU) also comes under this head. Borrowings are the deficit that is covered by taking loans from the market.

Nonplan Expenditure– Are those expenditures which remain uncovered under the five-year plan. It accounts from interest payments, subsidies, and wage and salary payments to government employees, grants to States and Union Territories governments, pensions, police, and economic services in various sectors, other general services such as tax collection, social services, and grants to foreign governments. It basically focuses on defense, loans to public enterprises, loans to States & UT’s and foreign governments etc.

Revenue Expenditure- Are those payments that are incurred for a day – to – day running of government schemes and projects launched to benefit the citizens of the country.  This also accounts for the amount spent on subsidies, interest payments etc.

Capital expenditure- Are those payments or expenditure done towards increasing capital. It includes the acquisition of assets that may include investments in shares, infrastructure as well as loans and advances given out by the government.

Public Debt: Amount for the money borrowed by the government and is, therefore, called public debt. Public debt is divided into two parts- internal debt and external debt.

Internal Debt: Includes money borrowed from within the country. It consists of loans for a fixed tenure of time at a fixed rate. The dated securities and treasury bills  account  for the contents of internal debt.

Generally, it happens that the government ends up spending more than what it had earned through various sources. This loss which is met with borrowed  funds is  called a fiscal deficit. Technically, Fiscal Deficit is equaled  to the difference of revenue receipts (net tax revenue + nontax revenue) plus Capital receipts (only recoveries of loans and other receipts) and Total Expenditure.