All About the International Solar Alliance, its Paris Declaration, Objectives, and work

The International Solar Alliance (ISA) is an alliance of more than 120 countries initiated by India, most of them being sunshine countries, which lie either completely or partly between the Tropic of Cancer and the Tropic of Capricorn. The International Solar Alliance has now extended to all members of the UN. The ISA assembly is the highest decision-making body. It gives directions on financial and administrative issues. India will be hosting the 2nd assembly of ISA. The event will be hosted by the Ministry of New and Renewable Energy.

Read more: Administrative Changes after the revolt of 1857 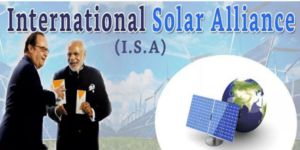 The ISA has been established by the Paris Declaration as an alliance dedicated to the promotion of solar energy among its member countries. The declaration was held on 30th November, 2015. The declaration shared the ambition to undertake joint efforts required to reduce the cost of finance and the cost of technology, mobilize more than US $ 1000 billion of investments needed by 2030 for massive deployment of solar energy, and pave the way for future technologies adapted to the needs,

The ISA’s major objectives include global deployment of over 1,000GW of solar generation capacity and mobilization of investment of over US$ 1000 billion into solar energy by 2030. It will collectively address key common challenges to the scaling up of solar energy in line with their needs.

As an action-oriented organisation, the ISA brings together countries with rich solar potential to aggregate global demand, thereby reducing prices through bulk purchase, facilitating the deployment of existing solar technologies at scale, and promoting collaborative solar R&D and capacity building.

When it entered into force?

There is no specific body in place to address the specific solar technology deployment needs of the solar resource-rich countries located between the Tropic of Cancer and the Tropic of Capricorn. There is a great amount of sunlight year-round which can lead to cost-effective solar power and another end uses with high insolation of almost 300 sunny days in a year. Most of the countries have large agrarian populations.

Absence of universal energy access, energy equity, and affordability are issues common to most of the solar resource-rich countries. International Solar Alliance (ISA) is conceived as a coalition of solar resource-rich countries to address their special energy needs and will provide a platform to collaborate on addressing the identified gaps through a common, agreed approach.

All About the International Solar Alliance, its Paris Declaration, Objectives, and work.

Why January 13th holds such prominence? Let’s find out, what all happened on this day?

Vocabulary and Comprehension Reading: How to practice them?