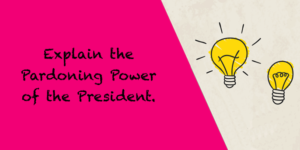 Article 72 says that the President shall have the power to grant pardons, reprieves, respites or remissions of punishment or to suspend, remit or commute the sentence of any person convicted of any offence. Now it is important to understand the difference between the types of Pardon i.e. between Pardon, Commutation, Reprieve & Respite.

The President can exercise these powers:

The power of the President to grant pardon extends in cases where the punishment or sentence is by a Court Martial but Article 161 does not provide any such power to the Governor.

The President can grant pardon in all cases where the sentence given is sentence of death but pardoning power of Governor does not extend to death sentence cases.