The article provides information all about Electoral Bond, its main features, Eligibility Criteria to buy electoral bonds, its needs and significance and controversies related to it.

What are Electoral Bonds?

Electoral Bond are the Bonds that allow donors to pay political parties using banks as an intermediary. 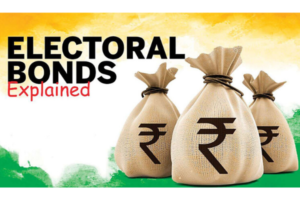 The electoral bond are aimed at rooting out the current system of largely anonymous cash donations made to political parties which lead to the generation of black money in the economy.