The Article provides insight all about East Asia Summit, where it was held, what are its potentials and its significance for India. 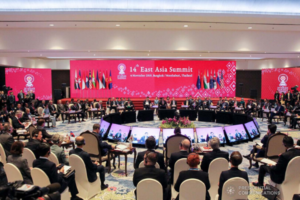 There are six priority areas of regional cooperation within the framework of the EAS. These are – Environment and Energy, Education, Finance, Global Health Issues and Pandemic Diseases, Natural Disaster Management, and ASEAN Connectivity. India endorses regional collaboration in all six priority areas.