What is Poverty? SSC Exam Notes

Poverty is a state or condition in which a person or community lacks the financial resources and essentials to enjoy a minimum standard of life and well –being that is considered acceptable in society.  Poverty is a significant issue in India. Despite being one of the fastest growing economies in the world, poverty is prevalent in our country. 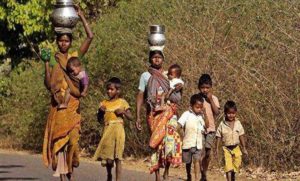 Here are a list of Anti- Poverty Programmes in India:

Development of Women and Children in Rural Areas

This Programme began in the year 1982 to provide suitable opportunities for self-employment to the women belonging to rural families who were living below the poverty line.

This Anti-poverty scheme was announced in the year 1991. The main aim to introduce this scheme was to utilize black money for building the house for poor families

National Assistance Programme was announced by the government in the year in 1995.  It was introduced to assist people living under the poverty line.

This scheme came into existence in the year 1993. The main aim of the scheme was to provide gainful employment during the lean agricultural season in manual work. To provide employment to people who want to do work but are not able to find it.

It came in the year 2000 and it was introduced so that villages could be given special assistance in five critical areas such as Primary health, primary education, housing, rural roads, and drinking water. The overall objective of improving the quality of life of people in rural areas.

The scheme came into effect in the year 2005. The main aim is to provide legal insurance for 100 days of wage employment to every household in the rural areas of the country each year, to combine the twin goals of providing employment

It was launched in the year 2015. The main aim was to bring Urban planning economic growth and heritage conservation in an inclusive manner to preserve the heritage character of each Heritage City.

For more such informative articles stay tuned to OWN TV