Indus Valley Civilization: Everything you need to know

This article aims to delve into the Indus valley civilization and study it from the perspective of the SSC CGL/CHSL and banking examinations.

The history of India began with the onset of the Indus valley civilization.

Read more: What is the profile of the Assistant to the Ministry of external affairs? 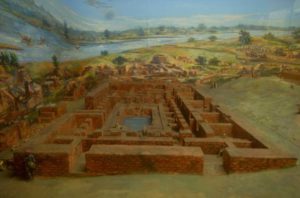 The town planning was done in a grid system.
Harappa and Mohenjodaro had their own citadel and acropolis which was occupied by the rulers.
Rectangular houses with brick lined bathrooms and wells together with stairwells found Use of burnt bricks is found to be common during this period.
The Drainage system in Mohenjo-Daro was impressive as it was underground.
Granaries constituted an important part of these cities
In the city of Kalibangan, many houses had their own individual wells.
The cities of Dholavira and Lothal were fortified completely and sections within the town were separated by walls.

Agriculture in the Indus Valley Civilization

Major cities in this civilization were built around rivers for proper irrigation.
Harappas were the first people to produce cotton.
Wheat and Barley were cultivated.
Rice too was possibly cultivated as rice husks have been discovered dating back to the Indus civilization.
Use of wooden ploughs to plough the fields with the help of Oxens was used.
Traces of canal irrigation have also been found in the city Shortughai.

Oxens, Buffalo, Goats, Sheep, and Pigs were domesticated
Asses and camels were used to carry load
Elephants and Rhino were known
Traces of horses around that period were found too, however they were not used widely.

Economy of the Indus Valley Civilization

The importance of trade in this civilization can be seen due to the widespread use of seals, uniform script and regulated weight measurement systems for transactions.
The Harappans carried trade in stone, metal and shells.
Weights are found in multiples of 16.
Barter system was the main system to conduct trade.

Crafts in the Indus valley Civilization

Bronze was widely used and manufactured
Brick laying was an important craft and skilled masons were required for it.
Potter’s wheel was used extensively.

Religion and culture in the Indus Valley Civilization

All people were a part of the same culture.
No temples and religious structures existed.
Weapons were rarely found.
Terracotta figures of mother goddess were worshipped. Harappans looked at earth as a fertility goddess and worshiped her.
Pashupati Mahadev seal found with elephant, tiger, rhino and bull surrounding him with 2 deers near his feet.
Peepal tree was worshiped.
1 horned rhino and humped bull were worshiped.
Amulets were used to ward off ghosts and evil spirits.
The Lion was not known
Harappan script dates back to 3000 BC and was pictographic in nature but hasn’t been deciphered so far.They are recorded on seals and only contain a few words.

Harappan script is the oldest script in the Indian subcontinent.

At around 1800BC it is believed that:
 There was decreasing fertility of soils due to increasing salinity.
 There was sudden subsidence of uplift of land causing floods.
 Earthquakes caused changes in the course of Indus.
 Harappan culture was destroyed by the invasion of Aryans.
All these reasons are said to have caused the decline of the Indus valley
civilization.
However, the latest artifacts and evidence of the survival of the civilization dates back to 900 BC.