Nutrition in Animals: What food can be given to them?

This article aims to delve into nutrition in animals from the perspective of the SSC CGL/CHSL and Banking examinations.

Unlike plants, animals cannot make their own food and depend on other
organisms for their survival.
Animals are also known as heterotrophs.

Read more: The Governor of states and their functions 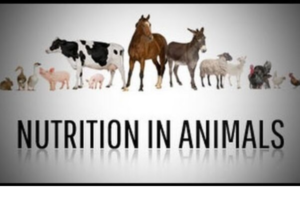 Animals are divided into 3 groups on the basis of their food habits:
a) Herbivores– those animals that eat only plants and their products such as grass, leaves, fruits, etc. are called herbivores. E.g. Goat, sheep, elephant,
etc.
b) Carnivores– those animals which depend on consuming other animals for their survival are called carnivores. E.g. Lion, Tiger, Frog, etc.

c) Omnivores– those animals which eat both plants and animals are called
omnivores. E.g. Humans, Bears, Crow, etc.
Food Chain: It is a linear network of food consumption which starts from
the primary producers such as plants and moves on to the consumers of
the plant and finally ends with decomposers.
E.g. carrot (primary produce) ⇒ rabbit (primary consumer) ⇒lion
(secondary consumer) ⇒ vulture (tertiary consumer)
Food web: The interconnection of multiple food chains is called a food web.

The food we eat passes through a canal in our body that is known as the
alimentary canal.
Liver, Pancreas and Salivary Glands secrete digestive juices into the
alimentary canal.
The following organs of the human body are involved in the process of
nutrition. They are:
Mouth: Ingestion takes place through the mouth. The mouth contains
tongue, teeth and the salivary glands. The 32 teeth in the mouth have
different uses in the process of digestion. Saliva produced by the salivary
glands helps breakdown carbohydrates in the mouth. The teeth are of the
following types:
The 4 front teeth are incisors. They are used for biting and cutting.
Teeth next to the side of the incisors are called canines. They are pointed and used for tearing food.
The teeth at the back are called molars and premolars. They are used to
chew and grind food.
The teeth are covered with a white substance called enamel.

The pipe which connects the mouth to the stomach is called
esophagus. The food moves through the esophagus through contraction
and expansion.

Stomach secretes the mucus, hydrochloric acid and few digestive
juices to breakdown the food to the simplest form. It is the widest part of
the alimentary canal.

This is where the complete digestion and absorption of the
food takes place. Bile produced by the liver helps in the digestion of fat.
Pancreas helps breakdown fats, carbohydrates and proteins into smaller
components. Villi are small tiny outgrowths in the small intestine which
increase surface area for absorption. The total length of the small intestine
is almost 7.5M.

Undigested food of the body is excreted through the large
intestine. Most of the water is absorbed in the large intestine. It is 1.5M
long.

Undigested food is passed out through the body from the Anus.

Simple unicellular organisms such as amoeba and paramecium nourish
themselves through phygocytosis.
Ameoba has temporary finger like projections called pseudopodia which help it ingest the food. The food vacuole of the amoeba acts as a temporary stomach for the food particle.
In the food vacuole secretes digestive juices inside the vacuole that help in its digestion.
The amoeba secretes waste out of its body by spurting out the waste through the nucleus.

In grass eating animals, Buffaloes and other animals swallow grass and store it in a separate part of the stomach called Rumen. These animals have a complicated system.
In Rumen, the food is partially digested and is called cud.
Later cud comes back into the mouth when the animal is hungry and chews it.
This process is called rumination.
These animals depend on cellulose which is a complex carbohydrate.