70 years ago, on 9 February, 1951, India conducted its first census after independence

What is the concept of the Census?

Census is a source to track the country’s success over the past 10 years, monitor the government’s current schemes and prepare ahead.

The early Indian censuses not only contain statistical records from early modern India, but also record the British meeting with their colonised subjects. These censuses record the efforts of the coloniser to recognise their colonial subjects and to incorporate India into the British Empire.

Read more: Does the New Economic Policy benefit you?

The Census under British India.

In 1871-72, under British Viceroy Lord Mayo, the first Indian census took place. The census in 1871-72 was the first effort to measure the age, caste, religion, profession, education and disease of each individual throughout India. Berar, Oude and Punjab have been deliberately abandoned during this census. Officials considered spending the money in these areas unnecessary because the regional census was recently measured.

The following eight censuses were characterised by distrust and uncertainty. Different rumours circulated over the Indian people that censuses helped the British implement new taxes, turn the population into Christianity, establish the Military Recruitment Registry or record forced migration.

The 1931 Census is often termed to be the last British-run census in India since 1941 the Census was significantly constrained due to World War II. The 1941 Census was restricted to only three or four figures, and even these fundamental figures were said to violate specific national or state theologies.

The first Census of Independent India.

After the independence of India, the census was assured through the Census of India Act 1948. The act laid down the rules and regulations for the operation of the national census. The Act also made it mandatory for the public to respond faithfully to all censuses while ensuring that their responses remain confidential.

Since independence, many individuals and organisations have been using census data for several purposes. The government uses the data to manage, prepare, establish policies and manage and review various public programmes. It is also used to distinguish political districts and appoint parliamentary representatives, state legislatures, and municipal authorities.

At the same time, the census data found importance to non-governmental entities too. The data is used by companies and industries to prepare the expansion in underutilised areas.

How does the government conduct the census?

A questionnaire is a primary instrument used in the census operations, taking into consideration and understanding the changes that a country needs. The list of questions helps the government to gather all the necessary information regarding the people. Some of the basic questions you can find on almost all census questionnaires is a name, sex, date of birth, age, current marital status, religion, mother tongue and literacy status. 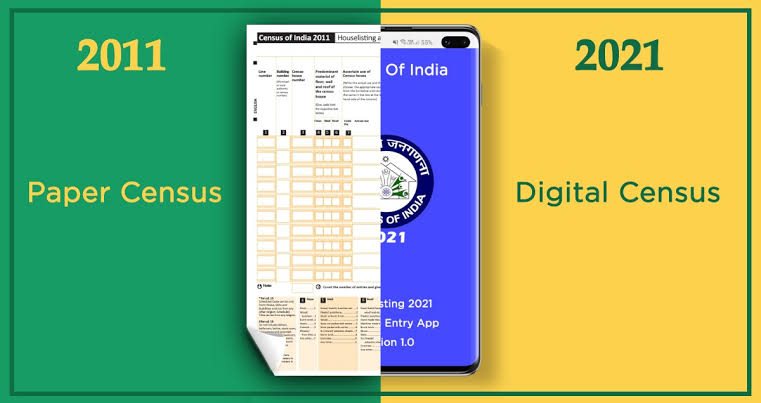 Background of the census

On 1 April 2010, the 15th Indian Census and the 7th Independent India-2011 Census began with the President, who is the first citizen of India, and the Vice President. The slogan for the census 2011 was ‘Our Census, Our future’. The census commissioner for the 2011 census was C. Chandramouli.

The Finance Minister  presented the first digital budget for the economy; she further announced that the Eighth Census of Independent India will be the nation’s first digital census. She further allocated ₹3,768 crore in the budget 2021-22 for carrying out the census in the digital mode

With the rapid development of India’s digitalisation, it will be interesting to watch Digital India’s Census 2021. Only time can tell whether the decision to carry out census in digital mode will be fruitful or not.