Important Institutions of the World : Know their Objectives

Numerous organizations are working to make the world a better place to live in. Let us have a look at these organizations and their functioning which are essential for the world.

It is a supranational, governmental organization which aims to oversee all countries of the world.

What are its Objectives?

It is responsible for the following tasks: 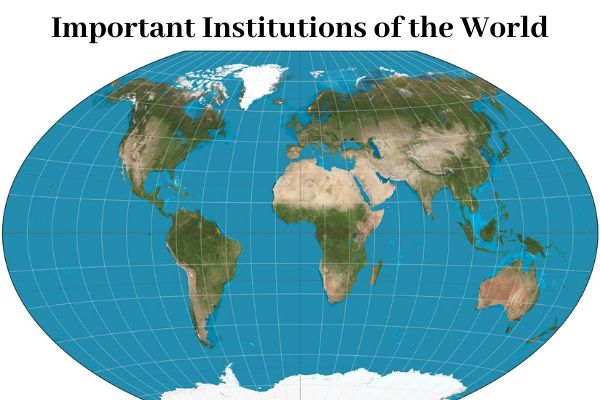 The UN has main organs that are concerned with different responsibilities of the UN:

c.The Economic and Social Council: The ECOSOC aims to bring all countries together to take action and move towards a sustainable future.

What are its objectives?

The decisions taken by these countries together on a global platform affect the entire world since these 8 countries make up 3% of the world’s area, 21% of the world’s population and 3.8% (US$2.9 trillion) of the global economy.

What are its Objectives?

It is the supreme organization when it comes to the coordination of international health projects. This organization works directly with the UN and aims to strengthen health facilities across the globe by promoting co-operation amongst medical science organizations.

NASA is an independent agency run by the United States government which is a pioneer organization when it comes to Space research and aeronautics. NASA was the 1st organization to set foot on the moon with the infamous Apollo missions.

NASA aims to make humans more aware of Space and develop technology to allow better space exploration in the future.

What is the Objective?

What was the main Objective?

The United Nations Framework Convention on Climate Change is an international treaty that aims to stabilize greenhouse gas emissions and stop climate change.

Read more: A Brief Overview of the Banking and Finance sector of India

The EU comprises of 28 nations in Europe which have a single integrated market and a standardized system of laws. Most Countries use a single currency and have a collective passport process which makes the European Union act like 1 single super nation in the global scenario.

The World Bank is an International Organization that provides loans to the governments of developing countries to pursue capital projects and take up poverty reduction projects. It has 5 subsidiary bodies under it:

∙         The International Bank for Reconstruction and Redevelopment (IBRD provides debt financing to the Private Sector.

∙         The International Development Association (IDA) provides concessional financing and hence it is also known as the ‘Soft- Loan’ Window.

This organization was formed along the World Bank and it aims to promote monetary co-operation, facilitate international trade and help countries manage their balance of payments.

To facilitate worldwide police co-operation and crime control on crimes that are transnational such as terrorism, cybercrime and organized crime.

Aims to promote development and co-operation amongst the 5 most developing nations of the world that together constitute 40% of the population.

Objective: It prosecutes individuals for international crimes of genocide, war crimes, crimes of aggression and crimes against humanity.

Number of personnel in the court: 15

Tenure of the Judges: 9 years

Members: 20 members along with a representative of IMF and World Bank

They meet to discuss policies that promote international financial stability. They represent 2/3rds of the world’s population and 85% of the world’s GDP.

18.Convention on International Trade in Endangered Species of Wild Fauna and Flora (CITES)

CITES aims to ensure that international trade in specimens of wild animals and plants do not threaten their survival. It works actively in protecting the Flora and Fauna.

Objective : It aims to support and improve infrastructure facilities in the Asia- Pacific region.

Objective: It aims to encourage creative activity and also aims to promote and protect intellectual property

Objective: It aims to facilitate co-operation amongst oil-exporting countries and ensure the stabilization of the oil market

Objective: It aims to stimulate economic progress and world Trade

Reserve Bank of India- Know about its Functions and organizational structure

INTERPOL – What is Interpol and what is its structure?