In the middle of 20 th century, India emerged to be a sovereign nation state. This enabled people of India to not only elect their representatives but also along with their elected representatives they were free to formulate
internal as well as foreign policies.
In post-independent era Indian foreign policy was formulated with proactive role played by out very first PM of India – Pandit Jawahar Lal Nehru. Even today he has been regarded as the architecture of India’s foreign Policy. These policies were based on certain practical
considerations, that gives an insight to aims and objectives to be followed. 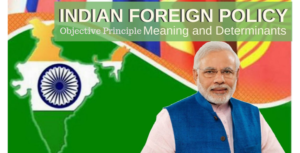 Aims and Objectives of IFP

⇒The very first and foremost objective of Indian Foreign Policy is about ensuring the territorial integrity. This objective assumed great importance as India’s neighbouring countries adopted aggressive approach that affected territorial intactness. India by pursuing its foreign policy wanted to maintain healthy ties with neighbouring nations as well as big powers in order to ensure the defined frontier for itself.

⇒For Second objective i.e. acceleration of pace of economic growth, India is focusing towards establishing healthy trade. India wants to maintain healthy bilateral and multilateral trade whereby abundant commodities could be exported and at the same time scarce article/good can be imported for self-sufficiency.

⇒ The third objective of ensuring absolute autonomy, got re-enforced as India became a member of Commonwealth of Nations Group’ formally by British Monarch. India made it clear then and there itself that this association is purely voluntary in nature and does not compromise with autonomy and sovereignty. This implied that India was free to formulate its trade policies without fear and favour.

⇒ The fourth objective was to promote democratic world as India adopted democratic system after its Independence and emerged to be the largest functional democracy in the world. Therefore, it decided to promote such democratic systems in other parts of the world also through peaceful transition and internal reform. All these objectives are based on practical considerations that reflects realism in our foreign policy.

1 st Principle– Indian Foreign Policy has been derived from the Doctrines of Buddhist faith known as – Panchsheel.
This principle includes 5 major components-

The 2 nd major principle is of Non- Alignment

⇒ This principle was advocated by Jawahar Lal Nehru in context of cold war at global level.
⇒ By the end of 2 nd World War all the countries got divided into two power blocs based on ideological differences.
⇒ Western countries led by USA formed capitalist bloc, whereas eastern European countries led by Soviet Union established communist bloc.
⇒ Since world has already witnessed two world wars, therefore smaller countries realised the need of aligning with either power bloc in order to defend themselves. This was the concept of collective
security.
⇒ All these aligning countries began to procure arms and weapons out of insecurity, which led to race for armament at global level. All these created a war like situation that to without any actual fighting.

• During the era of Cold war (1947-1991) India gained Independence from more than 200 years of colonial exploitation.
• After Independence Indian PM decided to promote socio-economic development with limited resources rather than procuring arms and weapons.
• Therefore, he advocated the policy of NAM, where India decided to maintain principled distance from both the two power blocs.
• In present times also India is of the opinion that several regional and global groupings can create polarisation at global level which can be diffused by the Principle of NAM.

The 3 rd Principle is of Complete opposition to any form of
racial discrimination.

The 4 th Principle is to ensure Nuclear Disarmament

⇒ As Nuclear attack was witnessed globally by the end of World War 2 (1939-1945), it was realised to ensure Nuclear disarmament for global peace and security.
⇒ Therefore, India signed an important treaty in 1963 known as partial Test Ban Treaty in order to support global community towards Nuclear Disarmament.