By the end of 1st decade of 20th century, revolutionary sentiments have started to emerge in the Indian youths.

By the year 1908, both moderates and extremists lost their historical validity as they failed to get a substantial result through constitutional agitation & limited mass struggle. Therefore, youths of India filled with energy and enthusiasm adopted a third-line approach whereby through Heroic action, they decided to assassinate unpopular British officers to create fear in their minds in order to achieve substantial results.

Read More: 15-POINT REFORM CHARTER: Why it was introduced?

Read more: Administrative Changes after the revolt of 1857 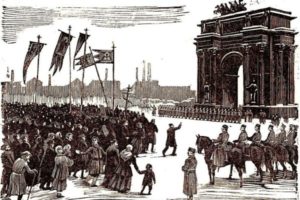 This marked the beginning of the revolutionary the trend in the Indian National Movement and these sentiments were expressed through several newspapers like Yugantar, Kal& Sandhya.

In the Year 1908, Prafulla Chaki&Kundi Ram Bose came up and decided to assassinate unpopular judge of Muzaffarpur, Kingsford.

They threw a bomb on carriage supposed to be occupied by Kingsford, but due to some miscalculations this targeted carriage was occupied by 2 British women.

Prafulla Chaki shot himself due to guilt on the spot &Kundi Ram was hanged by British Authority.

At the end of 1912, Governor General Lord Hardinge was attacked by SachendranathSaniyal& Rash Bihari Bose in a Public Procession at Chandini Chowk in Delhi.

Under the leadership of Lala Hardayal Sikhs started a revolt known as “Gadar” by the end of 1913.The greatest feature of the Gadar Movement was that it was purely secular in orientation even though dominated by members of one religious commodity.

Under the influence of an organized national movement, revolutionary movements also began to acquire organized shape.

Under the leadership of Azad, a prominent revolutionary organization was estd in Kanpur in 1924 known as HINDUSTAN REPUBLICAN ARMY/ ASSOCIATION.

Revolutionaries needed necessary financial resources to organize effective revolt and with such intension it was decided to capture the official fund of British authority.

Members of HRA stopped a Lucknow bound train at a substation Kakori and looted the cash of British authority.

■            This was the critical time when Azad was supported by Sardar Bhagat Singh and his comrades.

■            With the support of his college friends Bhagat Singh estd. an organization in 1926 known as PUNJAB NAUJAWAN SABHA.

■            Under the leadership of Azad, Bhagat Singh convened the meeting of revolutionaries at FirozshahKotla ground in Delhi in 1928. This meeting was for the promotion of socialism in India. Therefore, another name was given to HRA- HINDUSTAN SOCIALIST REPUBLIC ARMY.

■            On 17th December 1928 they attacked but due to misinformation is given by Sukhdev Thapar they assassinated ASP J. Saunders.

■            To oppose Public Safety Bill and Trade Dispute Bill, Bhagat Singh with his comrade Batukeshwar Dutt threw a harmless bomb in central legislative assembly in 8th April 1929. The intention was not to harm anyone but to oppose the enactment.

■            In Lahore conspiracy case, 3 revolutionaries were convictedand were awarded death sentence, to be hanged on 24th march 1931.

■            After the death of prominent revolutionaries in north India, these activities were carried forward in the eastern province of Bengal.

Thereafter British launched Chittagong conspiracy case in which Surya Sen was convicted and hanged in 1933.

■            All these acts indicated the popularity of revolutionary activities even though marked by violence.