She is popularly known as People’s Officer

Cracking any competitive exam needs a lot of hard work and patience. It is not an overnight job, one has to constantly prepare for it. The process needs focus and grit. Today, we will sneek peak into the journey of Samita Sabharwal, the youngest woman officer in India.

Smita Sabharwal, cracked the UPSC civil services examination in the year 2001. She was among the toppers in 2001 as she secured 4th All India Rank in the country. It is now more than 15 years of her services that she has worked as an IAS officer. She is also the country’s first woman officer who is appointed as an additional secretary to the Chief Minister’s office in Telangana.

She has been posted in Warangal, Visakhapatnam, Karimnagar and Chittoor so far. The local people of these areas still remember Smita for her excellent work.

Smita was born in West Bengal. Her father served as a colonel in the Defence Department and her mother was a homemaker. As per her story, cracking the civil services was never her aim until graduation but it was her father’s encouragement who forced her to join civil services.

A quote that changed her life

Her mother was her inspiration who always used one quote, “Everything becomes relevant when you put your heart into it.” This one particular quote really inspired her a lot and as a result, she started preparing for her civil services examination.

Originally, they are from Darjeeling but as her father was serving in the India Army, they had moved in various states of the country. It was after her father’s retirement that they settled in Hyderabad from where Smita graduated.

Academically Smita was a brilliant student. She was always among the toppers. She also came first in all-India ICSE class 12 exams in commerce stream. She later graduated in commerce stream from St Francis Degree College for Women in Hyderabad.

Immediately after graduation, she started preparing for UPSC. She is also a trained athlete and learned Hindustani classical music. She believes hobbies are equally important as much as other subjects to clear the exams.

Despite being a commerce student, she chose Anthropology and Public Administration as her optional subject for the UPSC exam. She was not able to clear  first attempt in Prelims, but, however, in her next attempt, she secured the All India 4th Rank. 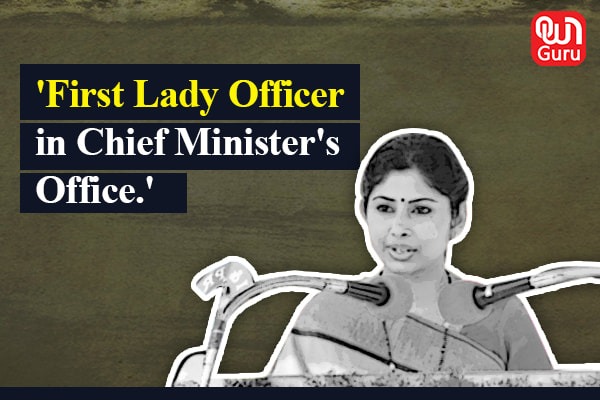 Hard Work & Smart work – Both are need of the hour

Her preparation strategy was to only study six hours a day and play for at least an hour. She was a firm believer of focused studying instead of studying the whole day and draining yourself. One has to rest and start studying the next day. And not to forget, your hobbies and interests are also taken into consideration in the final round.

Smita Sabharwal is a true inspiration to many women and breaking a lot of stereotypes. She is also known as ‘People’s Officer’ and she has really done a great job in the areas wherever she was posted.

Another feather in her hat

The next journey waiting to welcome her is the Chief Minister’s office in Telangana, as mentioned earlier, she is the first youngest woman who is appointed in the CM’s office. With 14 years of experience, she is known for her hatred towards corruption, illegal activities and irresponsible staff.

Things we need to learn from her

She has largely contributed to the public sector and gave basic education was always on her  priority, not to forget her hard-work in transforming government hospitals. Smita has clearly set an example for the youngsters to ensure success through hard work and devotion, also promises to be a good human being.

The will to achieve something and face all the hurdles that come in your way is the most important part of cracking every or any examination. You don’t have to necessarily read hundreds of books but read smart. Understand the basic idea of every subject and what all is important to study, make notes of all those things.

Anu Kumari- The Gem of Haryana