This article aims to delve into important amendments in the Indian constitution which have made a significant impact on the functioning of the state from the perspective of the SSC CGL/CHSL and banking examinations.

Amendment Bill in The indian Constitution

Article 368 of the Indian Constitution gives the executive of our nation the power to make amends to the constitution so that it can adapt to the present requirements.

The amendment of ordinary laws in our nation requires a simple majority in both houses of the parliament.

Majority (more than 50%) of the total members of the house that are present and voting is required. 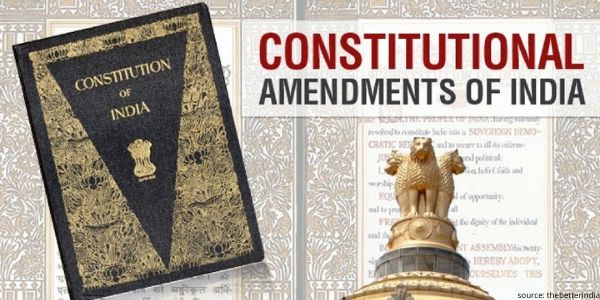 After a bill is passed in both houses, it is sent to the president for his/her approval.

Amendments of Fundamental rights, Directive Principles and other special laws

The amendment of the aforementioned laws requires a special majority in the parliament.

Special majority requires the approval of more than 50% of the total members of a house and approval of 2/3rd of the members that are present and voting.

When a matter concerning the federal structure is to be amended, a special majority along with approval of more than half of the state legislatures is required. Election of the president, extent of executive power, amends to the Supreme Court and High Court, distribution of powers between state and the center, representation of the states in the parliament and matter pertaining to any list on the 7th schedule is amended in this manner.

Read more: What are the basic properties & Concepts of sound?

Read more: A Brief Overview of the Banking and Finance sector of India

As of march 2019, a total of 103 amendments have been made to the constitution.

Some important Amendments in the Constitution