All about the trade Deficit, its meaning and significance

We can simply say that the trade “balance” of a country shows the difference between what it earns from its exports and what it pays for its imports. 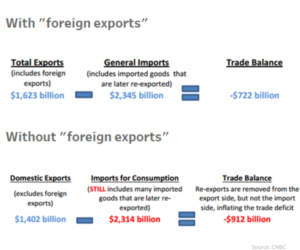 What does a trade deficit signify?

More often than not, the trade deficit of a country is due to a combination of both these main factors.

Is a trade deficit a bad thing?

Not necessarily. No trade is ever balanced. That’s because all countries have different strengths and weaknesses.

Another way to look at trade deficits is to look at the outcome of trade agreements on consumers instead of producers. For instance, if cheaper and better-quality milk or steel was to come into India, Indian consumers would benefit as their health improves and their cars become more affordable.

Of course, Indian producers of steel and milk will cry foul but then if they are not efficient, they should be producing something else.

Trade doesn’t have elements that comprise a country’s strategic interests and that is why there are some commodities in which every country wants to maintain self-sufficiency.

But merely levying higher tariffs or not choosing to trade does not bring about self-sufficiency. For attaining self-reliance, a country’s domestic industry has to improve and the best of this happening is when one learns from the competition.

For more such informative articles stay tuned to Own Guru.